When it comes to Biblical History, the first land comes to mind is Israel, for sure, but Turkey is not less important in terms of the history of Christianity. In fact, it is the focus of the New Testament as it was the location for many of the people and events in biblical history.

ANTIOCH, THE FIRST CHURCH OF FIRST CHRISTIANS IS IN TURKEY

Two out of the five centers of the Pentarchy are in Turkey: Constantinople (Istanbul) and Antioch (Antakya). Antioch is located in southeastern Turkey and known as Antakya by native Turks. Antioch is mentioned in the Bible as where the disciples were called ‘’Christians’’ fort the first time. Moreover, it is home to one of the earliest and oldest surviving churches in the world, established by Saint Peter himself.

All of the Seven Churches, that is mentioned in the New Testament Book of Revelation are located in Turkey or Asia Minor as it was called in the Roman Period. According to Revelation 1:11, Jesus instructs John the Apostle to:

"Write on a scroll what you see and send it to the seven churches: to Ephesus, and to Smyrna, and to Pergamum, and to Thyatira, and to Sardis, and to Philadelphia, and to Laodicea."[1]

TURKEY HAS THE TOMB OF ST PHILIP THE APOSTLE

In 2011, archaeologists excavated the tomb of St Philip the Apostle in Hierapolis Ancient City which is located in Pamukkale, Denizli province. Hierapolis, also famous for cotton white travertine pools is a 3-hour-drive from Ephesus.

TURKEY IS THE BIRTHPLACE OF ST. PAUL

St Paul who is considered as the most important person after Jesus in the history of Christianity was born in Tarsus which is in Turkey. Before his name was changed to Paul, he was called ‘’Saul of Tarsus’’.

EPHESUS WHERE YOU FOLLOW THE FOOTSTEPS OF ST PAUL, ST JOHN AND MOTHER MARY

The city of Ephesus, as it was called “the light of Asia” by Pliny the Younger, has a vital role in the spread of Christianity as being the capital city of Asia Province of the Roman Empire. One of the criteria for Ephesus to be included in UNESCO World Heritage List is that Ephesus had played a decisive role in the spread of Christian faith throughout the Roman Empire. In the UNESCO’s website, it is explained as follows: ‘’ The extensive remains of the Basilica of St. John on Ayasuluk Hill and those of the Church of Mary in Ephesus are testament of the city’s importance to Christianity.’’

Ephesus, being the commercial, political and administrative center of Asia Minor was an ideal place for missionary works. The city allowed both land and sea connections to the other important centers of Asia. Hence it was the best location to affect a major population in terms of conversion from paganism to Christianity. All the seven Churches mentioned in the Revelation were within easy reach of Ephesus and were founded during the missionary journeys of St Paul. During his missionary journeys, Ephesus served as Paul's headquarters and the first church and the center of the Christian movement.

The Epistle to the Ephesians, also called the Letter to the Ephesians is the tenth book of the New Testament and it is tought to be a letter from Paul to Ephesian Christians.

EPHESUS HAS THE TOMB OF ST JOHN THE APOSTLE

According to the tradition, Apostle John took Virgin Mary to Ephesus where she spent the last days of her life in a small house, known as the House of the Virgin Mary today and well-preserved remainings of the house serves as as a holy site for pilgrimage by the Catholic and Orthodox churches, as well as being a holy shrine for Muslims.

Irenaeus, a disciple of Polcycarp indicates that John stayed in Ephesus until his death during the reign of Emperor Trajan (98-117 AD). Eusebius, a famous early church historian from 3rd century also records that John stayed in Asia until his death in Ephesus. It is believed that John was exiled to Patmos Island (AD 69-70) where he wrote the Apocalypse then he was released back to Ephesus where he ministered for around 25 years to the Christian community.

Even if you are not interested in the biblical history, a tour to Ephesus would not be complete without an enriching visit to the 6th century Basilica of St John the Evangelist which was once an enormous church that stands on top of the burial site of St. John the Apostle.

EPHESUS WHERE MARY IS GIVEN TITLE OF THEOTOKOS, ‘’THE MOTHER OF GOD’’

Two important Councils of the early Church were held at Ephesus in 431 and 449 CE. Mother Mary was granted the title of Theotokos ‘’The Mother of God’’ after the Third Ecumenical Council that was held at the Church of Mary in Ephesus in 431 AD.

The city shifted in five distinct locations over time, each within a small area. The Apostles Paul and John were familiar with the city that scholars have dubbed "Ephesus III" the largest (in area) of the five.

The areas where Ephesus located on as follows: 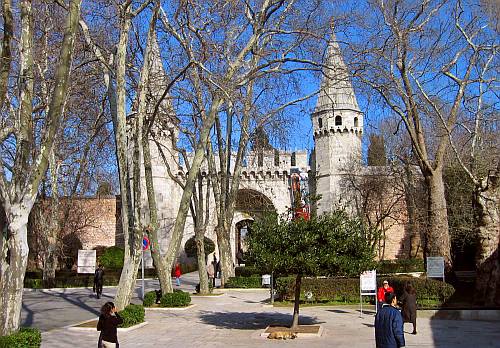